Fantastic article by Paul Stenquist about the our Saturday morning “Parking at Pasteiner’s” printed in the Friday, August 20th edition of the New York Times. (scroll down for complete article).

DETROIT — What do the men and women who design cars drive? What kind of machines do sheet-metal artists park in their garages? A recent Saturday morning at Pasteiner’s Auto Zone Hobbies on Woodward Avenue in metro Detroit provided some interesting answers.

Pasteiner’s is a meeting place for car lovers of all types, but automotive designers have a strong affinity for the smallish store and its parking lot. That’s true in large part because the owner, Steve Pasteiner Sr., created cars for 23 years in Buick and Chevrolet studios, achieving assistant chief designer status. After calling it quits, he opened the store, offering an abundance of automotive books, magazines, models and car-folk camaraderie.

“It was almost a selfish thing,” Mr. Pasteiner, 79, said. “I needed a place to go after retirement.”

So did his fellow automotive stylists — the people who doodled cars while the teacher thought they were busy completing lessons and grew up to design cars in the studios of Detroit’s Big Three and for other carmakers worldwide. And every Saturday morning, many of them drive their favorite rides in for the weekly “Parking at Pasteiner’s” event, where they display their machines, renew acquaintances and pay homage to Mr. Pasteiner, the Pied Piper of Woodward. This Saturday is the Woodward Dream Cruise, billed as the world’s largest one-day automotive event, so Pasteiner’s will be a focal point. 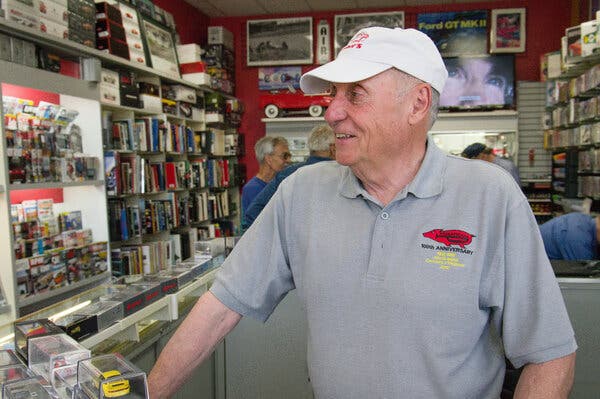 While Mr. Pasteiner had a very productive career at General Motors, he upped the ante after leaving, creating beautiful automobiles at his own design and prototyping business, Advanced Automotive Technologies — not merely sketching the machines but rendering them in fiberglass and metal.

Among his favorites is a station wagon-like version of the 1953 Corvette that was inspired by G.M.’s Corvette Nomad concept car. He built 14 copies, sold 13 and kept one. He also constructed a “Road Warrior” cruiser, on a Jeep chassis and dropped in a hemi engine.

But his most admired creation may be the Helldorado, a hand-built, one-off Cadillac sports car. Constructed on a steel-tube space frame, the gull-wing coupe is powered by a midmounted Cadillac V8. The styling is extreme and delightful, with rally-inspired center-mounted headlights and flanks that form an aerodynamic wing.

“My Helldorado is the car you dream about as a kid,” Mr. Pasteiner said. “I’ve been fortunate enough to have made good on that dream.”Image 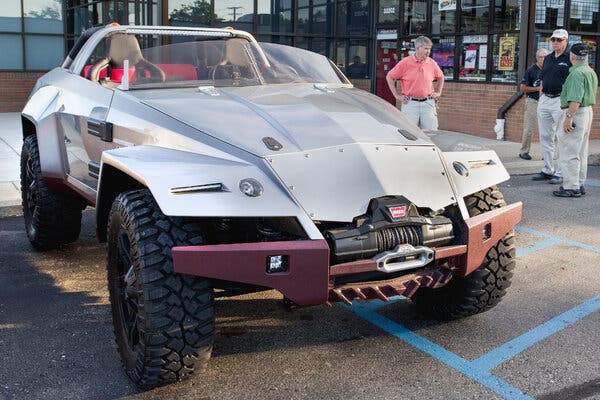 Kip Wasenko, a Pasteiner’s regular, is a retired designer whose 40 years with G.M. included a long list of achievements. He worked on the Cadillac Evoq concept car, which was judged best of show at the 1999 North American International Auto Show in Detroit and earned him and his creation an invitation to a design exhibit in Milan. As design director for Cadillac, he created the first of the brand’s heralded “art and science” automobiles and styled the Cadillac that raced at Le Mans.

Mr. Wasenko is inspired by the automobiles of Italy.

“Art is such an important part of Italian culture,” he said. “Going all the way back to the 1930s, Italian design has consistently been more advanced, more beautiful.”

His love of Italian design plays heavily in his pride and joy, a nearly flawless 1970 Ferrari Type L Dino 246. 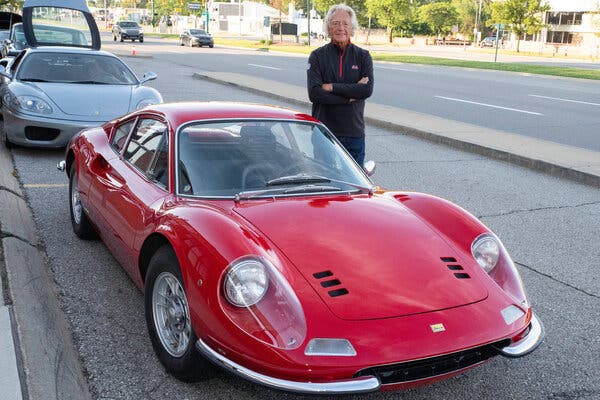 Kip Wasenko and his 1970 Type L Dino 246. “Art is such an important part of Italian culture,” he said.Credit…Paul Stenquist

While many of the Pasteiner’s regulars are retirees, Darby Jean, 28, has the enviable job of designing cars for Chevrolet’s Performance Division. Influenced by classic collectibles, including the ’63 Corvette Sting Ray “Split Window” Coupe, she is working on several future products. When it’s time to draw, she starts with pencil and paper rather than a computer.

But on weekends she drives a ’99 Mazda Miata racecar in the StreetMod class of the Gridlife Track Battle series. Although StreetMod machines race on tires meant for the street, they are heavily modified. Ms. Jean’s car generates 360 horsepower at the wheels.

“Racing influences what I draw,” she said. “I know what works well on the track; that influences the ideas I put on paper.” 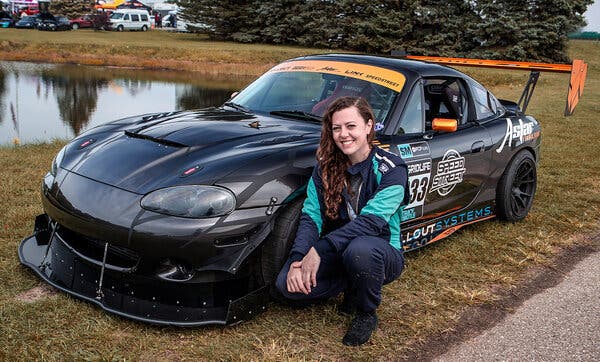 Darby Jean designs cars for Chevrolet’s Performance Division and drives a 360-horsepower Mazda Miata on the racetrack. “Racing influences what I draw,” she said.Credit…Turbo Tara Media

Chris Young worked on the design of the Bronco Sport at Ford Motor. One of a growing number of Black Americans working in automotive design, Mr. Young follows in the footsteps of McKinley Thompson Jr. — Ford’s first Black designer and a creator of the first Bronco.

A car guy from the time he fell in love with Matchbox models at age 10, Mr. Young owns no fewer than a dozen cars. Among his favorites are a Porsche 928, a Jaguar XJ6L Series II and a pair of Lotus creations: a ’64 Elan Series 2 26R and its progeny, a 2005 Elise, one of just a few cars he bought new.

“Most of my cars harken back to a time when cars reflected the big personality of the designer, rather than the work of a committee,” Mr. Young said. “All my vehicles remind me that cars should be special.” 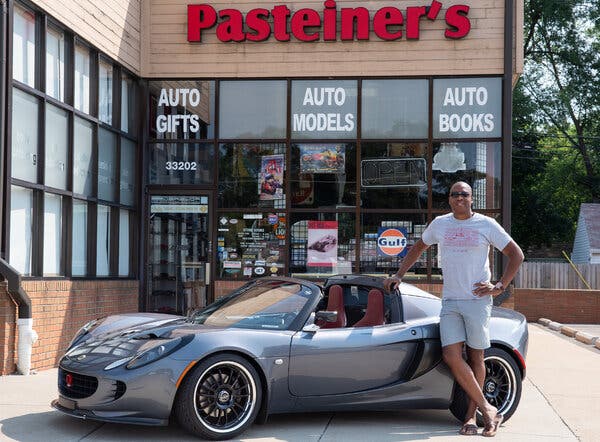 Chris Young and his 2005 Lotus Elise, a uniquely compact and sporty machine from Britain.Credit…Paul Stenquist

Jon Albert designed cars for 32 years in Detroit studios and taught design at the College for Creative Studies in Detroit. He now serves as lead designer at Murray Design, a marketing and design company. He developed a fondness for British sports cars at an early age when he was given an MG TF toy car. Shortly after retiring from full-time work at G.M., he bought a 1946 MG TC. A home-market car, it sports the original running gear and the classic large headlights that U.S. import models lacked. 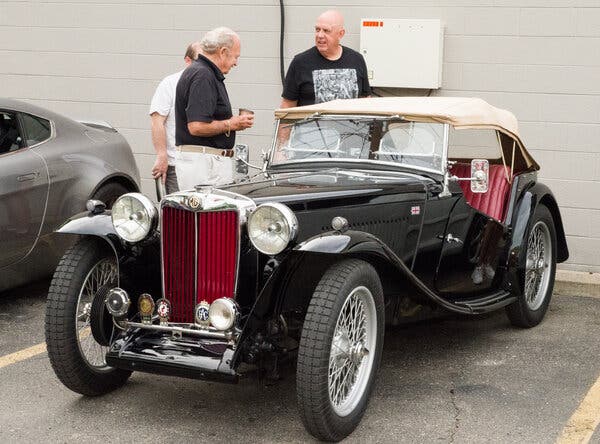 “I’ve always had a thing for well-designed cars that are classic anachronisms, a breed of vehicle whose design is so sound that it transcends time.” Mr. Albert said.

Carolyn Peters, a California native who studied automotive styling at the Art Center College of Design in Pasadena, is a lover of American automobiles. She worked as an interior designer at G.M. in the ’80s. She now teaches design part time and consults with designers at automotive aftermarket companies and Czarnowski Collective, a company that creates events, displays, work spaces and more for tech and automotive manufacturers. 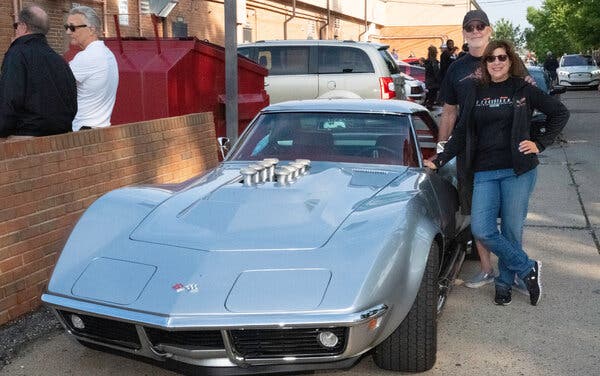 Ms. Peters owns a ’69 Corvette Stingray, equipped with a modified and extremely potent version of Chevrolet’s 427-cubic-inch engine, and a black ’69 Dodge Super Bee. The Super Bee is a pavement-shredding beast of a car thanks to a 440-cubic-inch Dodge engine that produced 512 horsepower on a dynamometer.

Her husband, Tom Peters, has a similar automotive patriotism. A former director of design for the G.M. Performance Car Studio, Mr. Peters was the lead designer on many Corvette and Camaro models. He was inducted into the Corvette Hall of Fame in 2019.

“American cars from the ’60s give you a feeling that you can get away with anything,” Ms. Peters said. “I try to bring that feeling of excitement and energy to my design work.”

Buck Mook worked on 47 design projects in a 30-year career with Ford. A car guy to the core, he owns 28: The oldest is a 1903 Michigan, and there is at least one automobile from every decade that followed. The car that most influenced his work is the 1963 Studebaker Avanti.

“When I was a kid, I fell in love with that car,” Mr. Mook said. “I first saw it in Time magazine. It was shocking in how different it was.” 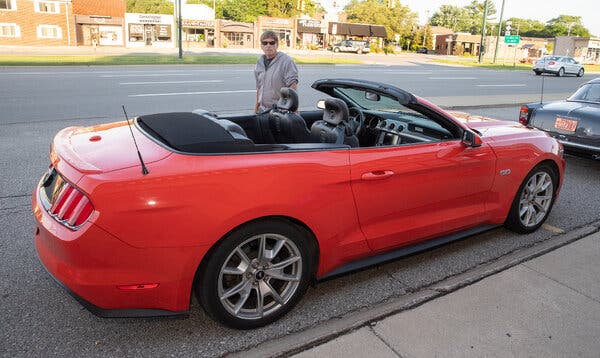 Buck Mook owns 28 cars, many of which are valuable. His daily driver is a 2015 Mustang GT convertible.Credit…Paul Stenquist

From among the many cars Mr. Mook designed, he takes pleasure in the Mustang II. Some 50 years ago, Ford held a contest among its designers to come up with a small Mustang. Lee Iacocca picked Mr. Mook’s concept. He’s equally proud of the ’94 second-generation Ford Probe that he helped design and that looks good decades later. His daily driver? A 2015 Mustang GT convertible.

Bob Boniface, global director of design for Buick, is another lover of Italian sheet metal. “I’m drawn to cars that challenge your sense of aesthetic,” he said. He owns eight cars, including Lancias, Alfa Romeos and a Ferrari that once belonged to Peter Sellers.

Speaking of one of his cars, an Alfa Romeo Junior Zagato 1300, he calls it a remarkable achievement in design efficiency. The car’s metal skin is almost shrink-wrapped around the occupants and the mechanicals. No space is wasted.Image

His admiration for Italian makers extends to engineering as well. “The Italians built machines that were like no other vehicles of their time,” Mr. Boniface said. “Beautiful aluminum castings, brilliant engineering solutions.”

He added that in the 1950s, G.M. looked to the Italians for inspiration — the ’55 Chevrolet’s Ferrari-look grille is a classic example. But the Italians looked to G.M. as well. The Lancia Aurelia America is an Italian classic, and the European designers borrowed wraparound windshields and corsair bumper design from their U.S. counterparts.

A bit of international give-and-take.